A report based on interaction with the boycotted families of Brahmapura village, P.S- Krusnaprasad, Dist- Puri, Date-11/05/2021 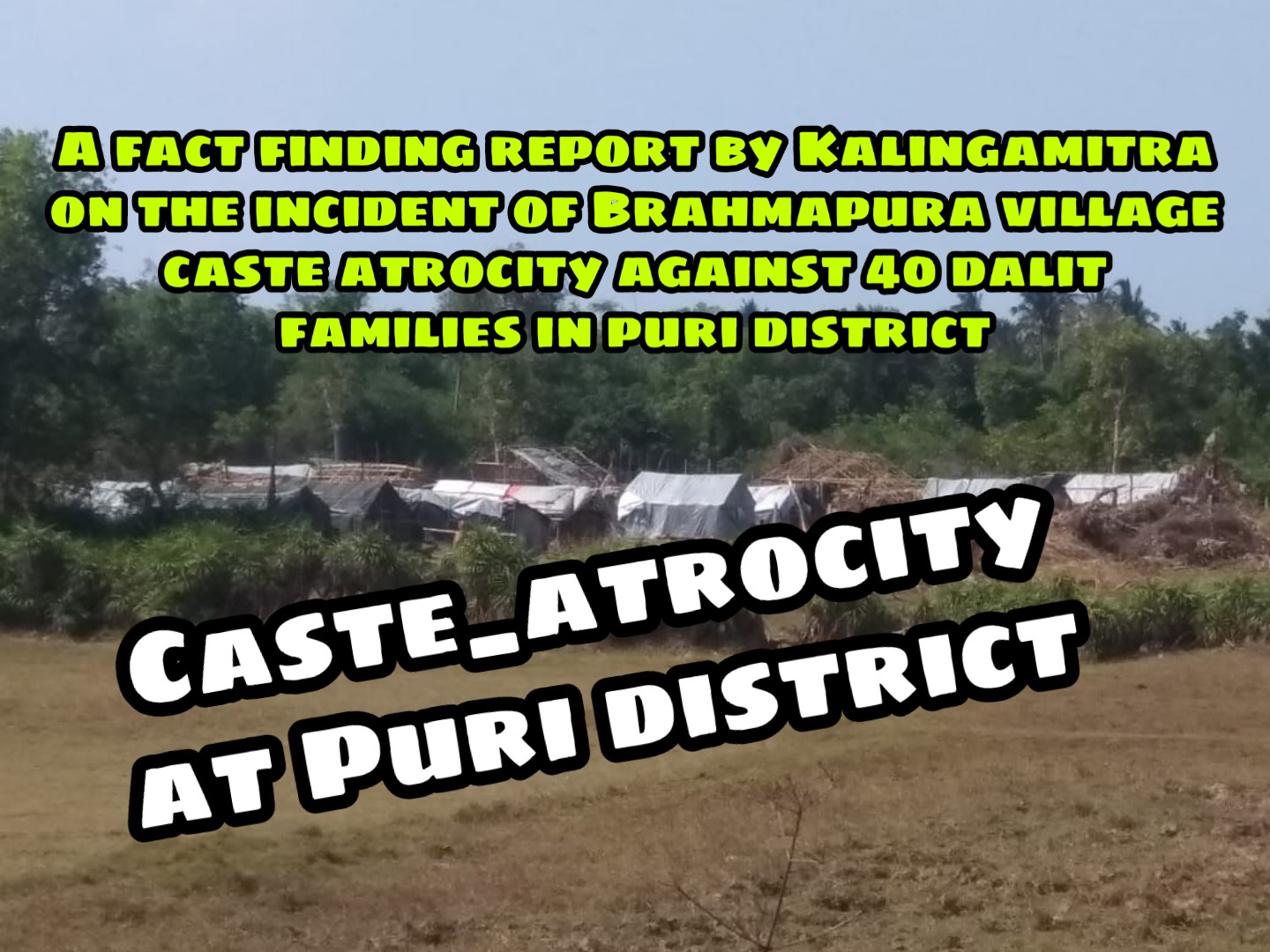 Forty-eight Dalit families in Puri District of Odisha are living under extreme fear, threat starving, and struggling for a life of dignity from last three months. Undoubtedly Dalits are always a victim of caste system since time immemorial. But the recent incident in Brahmapura village under Krusnaprasad police station of Brahmagiri block in Puri district, forced us again to think that, Dalits are only a matter of subjugation by prohibition of their basic human rights as a fellow citizen. After facing discrimination and humiliation, starving themselves without any hope for last three months. Today, When the world is in this crisis mode of covid-pandemic where many nations, states extending their helps to save human being with kindness, at that very time, in Odisha 48 untouchables families left their place of birth to save themselves from inhuman caste oppression. They started their journey on 25th April in the hope of justice, to get freedom of their choice to live a life with respect. But unfortunately, they are staying under the sky without having any roof over their head to protect themselves from heat, storm, rain of the nature since last few days. Indian constitution guarantees right to lives of its citizens. Under article 17 practice of untouchability is a crime. Still untouchability is practiced in each village. Practice of untouchability is a pan Indian phenomenon. We strongly reject those false comments that caste is not prevail in India anymore. The incident at Brahmapura village of Krushnaprasad P.S in Puri reveal the untold truth of the inhuman practice of untouchability which is not unusual event in India.

According to the report Brahmpaur is an island in Chilika. There was a quarrel between two young people from Bauri (Bhoi) caste (untouchable) and Khatia (Dhibar/Kaibarta) caste, (touchable) SC and dominant in the Brahmapur panchayat. On 13th February 2021 around 7.00PM Akash Pahana, about 19 years old from Bauri community went to buy cotton candy (Bombay Laddu) to the chowk area. There were many people from the Khatia around the seller. During that time Akash’s 10 rupees fell on the candy box. He asked the seller to return the money. At that time, some people from Khadia caste encircled and scold Akash that, “how you Bauri dare to come in inside us”. And this incident took a different mode when Pralaya Jena aged about 17-18 years from Khatia Community physically attacked Akash. After hearing about the fighting (Akash) his parents, and people from Bauri community ran towards the place to save Akash. On the following day the Khatia community broke Kothaghara(Community centre ) of the Bauri caste and abused them in their caste name. After the incident leaders from Bauri community wanted to compromise the issues. But the Khatia community did not listen them. Finally, Bauri Caste people decided to take the help of police. They went to Krushnaprasad Police station to resolve the issue on 14-02-2021. On the way the culprits abused them again. In fear of being attacked, lose their occupation and basic needs of survival they requested police to compromise the case rather registered the case. At the same time Khatia Community decided to boycott the Bauri community to use public places, walk on the road markets, accessing water from tube wells, shops, bathing ghats etc. The Bauri community of Brahmapura village approached to SP, Puri on 02-03-2021 to settle down the issue. SP assured them to take a step to deal the issues. But there was nothing happened. The Bauri community being boycotted from a three-month long time, lost their livelihood, lost their savings and out of starving they started fled to get justice. On 25th April, all members walked towards District Magistrate Puri to look into the matter and to provide some stay arrangement in a suitable place. But on the way towards Puri they met Devendra Pahana a fellow caste man from Nathapur, a kind- hearted man stopped them and asked for not to walk such a long distance, as Puri is around 50 KM from their village. He showed them a government land thereby to stay temporarily and provided some rations to survive. Now since last 15days they are staying in the open sky having only in temporary polyethene tent which cannot save them from rain, heat, storms. They do not have anything to eat, no water to drink, no clothes to wear. In a democratic nation having the biggest constitution of the world, its people are not safe, caste oppression is an everyday incident.

This is only an incident but the reality behind this boycott is quite horrible. One could not imagine that in this 21st century a member of the lower caste can not choose an occupation by his own choice. The reality is like this, Bauri community of the Brahmapura village used to carry Palki (sedan) of the upper caste during marriage. But due to education the younger generation refused to do the same caste occupation since 2008. After this refusal there was a growing rage of upper caste against untouchables. The untouchables were dependent on the upper caste because Brahmapura village is an island in Chilika,Odisha And the Khatia are the dominant caste in that region. So, the untouchables were tolerating the oppression from a long time as stated by Bhajan Bhoi, a villager. In this system of caste, it is a crime to give up any degraded position and uplift the status. And many cases like this happened before in that region as stated by Ashok Mallick a dalit activist from Bhubaneswar. ‘What a tragedy?” We have lost our humanity to practice caste system, and caste system is nothing but the Brahminical Hindu system. All SC, ST OBC should renounce Hinduism to revive humanity.

One thought on “A report based on interaction with the boycotted families of Brahmapura village, P.S- Krusnaprasad, Dist- Puri, Date-11/05/2021”