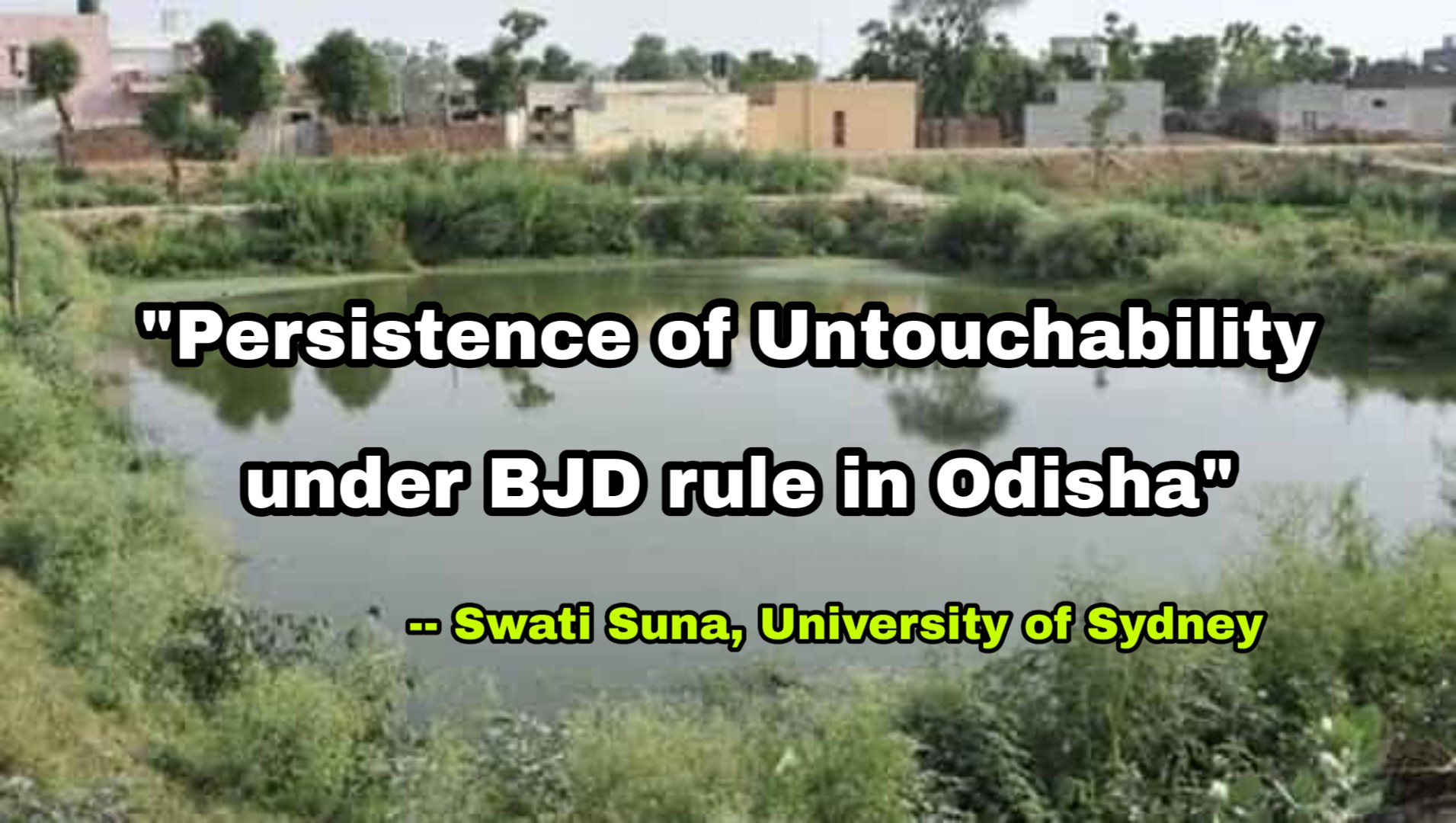 Throughout India, various forms of caste-based atrocities are taking place. Dalits remain socially and physically excluded from mainstream society. National Crime Records Bureau (NCRB) data revealed that “the conviction rate in offences under the SC/ST Atrocities Act was only 32%, nationally and the pendency rate of cases an alarming 94%”, reported The Times of India. Concentrating on Odisha, 1,886 and 26.2 percentage cases reported. A recent study shows that the highest number of atrocities and caste-based discrimination, exclusion and violence against Dalit occurred in Odisha. When it comes to Dalit women, atrocities and sexual violence become severe. According to the National Crime Records Bureau (NCRB), Dalit and tribal girls have no place in India, reported by Indian Express (2020).

Dalit in Odisha faces multiple forms of exclusion and deprivation regarding accessibility of public places and natural resources (Thorat, 2002). These exclusions are most pronounced with regard to access of water. Dutta et al. (2018) reported, there were many cases of upper castes having beaten and abused Dalit women for drawing potable water from government-dug deep well. However, there is growing resistance among the Dalit community, which has decided not to tolerate caste-based discrimination any longer and has asserted their right to access to justice. Despite growing protest, resistance among the Dalit against untouchability, discrimination, and exclusion, untouchability and related violence remains intact in Odisha. A recent incident that has occurred in the Balangir district of Odisha is a case in point. A group of Other Backward Castes (OBCs) men belonging to the Teli caste assaulted Dalit women with filthy language and drove them away from the village pond.

The village pond is for public use. However, the Hindu holds hegemony over these ponds and exercises their power to create fear, harassment, and physically attack against Dalit and more specifically Dalit women (Tiwary & Phansalkar, 2017; UNHCR, 1999). The bathing place, known as ghat, is divided by the caste, but all the castes, including Scheduled Tribes (STs), can take bath anywhere they want, but the Dalit cannot take bath wherever they want. The way village is divided into ghetto of castes; village pond is divided the same way. Moreover, bridging these caste rules of the pond is punishable in all villages.

The atrocity took place on 29th march 2021, and it has been reported that the Hindus of the village went to Dalit ghat and shit there. Because of this, Dalit women went to take a bath in the place where OBC take bath. According to village law, Dalit cannot go against these unconstitutional laws. As a result, a gang of OBC men rushed with being naked into the spot where Dalit women were bathing. The report says that:
“On date 29/03/2021 around 12 noon, Seven Dalit women were taking bath at Teli ghat, because Dalit ghat was full of toilet. It caught in the eyes of Savarna Teli men. Four Teli men name Gulap Sahu (age 40), Ramesh Sahu (30), Satya Sahu (27) and Mishra Sahu (35), rushed into the bathing (ghat) place and removed their lungis, underwear and clothes (naked themselves) in front of the ladies and forcefully bathed on the same place in between the ladies.”

Women had requested them to wait as they were bathing. OBC men abused with filthy language to insult and harassed Dalit women. It has registered in FIR that, “how dare you ‘Ganden‘ (Dalit caste known as Ganda or Dom) women, ‘Dom’ women, ‘Ghuda gehi‘, ‘barabani‘, ‘Dari’ (filthy abusing language), go away with your buckets and belongings”, and you have no right” (Tamar e bandh registry Kala ta ken, have you registered this pond on your name?) to bath here. This phrase conveys the nature of the contempt, authority and power that these men exercise over Dalit women bodies and the level of impunity they enjoy even after committing caste atrocities against Dalit women. Languages have very different rules regarding gender, especially when it comes to Dalit women– but does this affect how we perceive the world?

It has also registered under FIR that OBC men claimed, ‘You cannot do anything to us, and not even the police can do anything’, which means they are above law and constitution’. Why do OBC men feel the power and have the authority to use kind of languished against Dalit? Have the police given this power to them? Why did the Loisingha police not arresting these casteist men? Why section 354 of the Indian penal code is missing from FIR, which police must process, that says that:
”Whoever assaults or uses criminal force to any person, intending to outrage or knowing it to be likely that it will thereby outrage the modesty of that person shall be punished with imprisonment of either description for a term which shall not be less than one year, but which may extend to five years, and shall also be liable to fine.”

Why cannot Dalit take a bath freely anywhere in ponds? The caste system and its entrenchment within Indian history have resulted in hostile interactions between castes (Nambissan, 1996). The result is a deeply divided and hierarchical society with those in the Dalit experiencing exclusion from all social places from the temple, village wells, shops, and schools. These are not the stories of hoary past, rather than continuing with the barbarity and impunity of Hindus against the Dalits. The same practice has been repeating in modern Odisha. Dalit women aware of their constitutional rights, and they know they are human to live freely.

However, specifically in western Odisha, the OBC community deny Dalit as a free human. They use their power over Dalit to maintain caste superiority. Untouchability was abolished under Article 17 of the Indian constitution. The imposition of any disability resulting from “untouchability” is a crime punishable by law. However, despite 70 years of constitutional provisions and safeguards, Dalits remains untouchable across India.

In the absence of strong anti-caste politics in Odisha, the BJD government paid lip services and allowed untouchability to thrive in all domains of lives. Dalit’s voice not heard in the mainstream Odisha media, not even with digital and social media (Mandal, 2020). Upper caste media never report but manipulate the incident in favor of upper castes. Upper-caste’s media portrait that casteism/untouchability does not exist in Odisha anymore. Further ruling BJD government portrayed a peaceful face of Odisha outside the state. Neither the Odisha government nor police takes action against untouchability, sexual violence, atrocities against Dalit and Dalit women. Rawat (2011) says untouchability, sexual violence, exclusion manifests today more violently than ever before. Not only upper caste women and men are the most discriminatory toward Dalits, but also the OBCs and STs practice untouchability against the Dalits. The most potent form of verbal abuse directed at them is abusive language and caste-related insults. Physical and sexual assaults against Dalit women were not uncommon, despite being far less common than verbal abuse.

The ground reality reveals the depths of the heinous caste system and the extent of discrimination and stigmatisation faced by Dalits in all aspects of life. Access to water appears to be one area where caste-based discrimination is common in Odisha. Despite constitutional provisions guaranteeing equal rights to all, such discrimination persists, and Dalit access to water in Odisha is usually dependent on the Hindus.

One thought on “Persistence of Untouchability under BJD rule in Odisha”