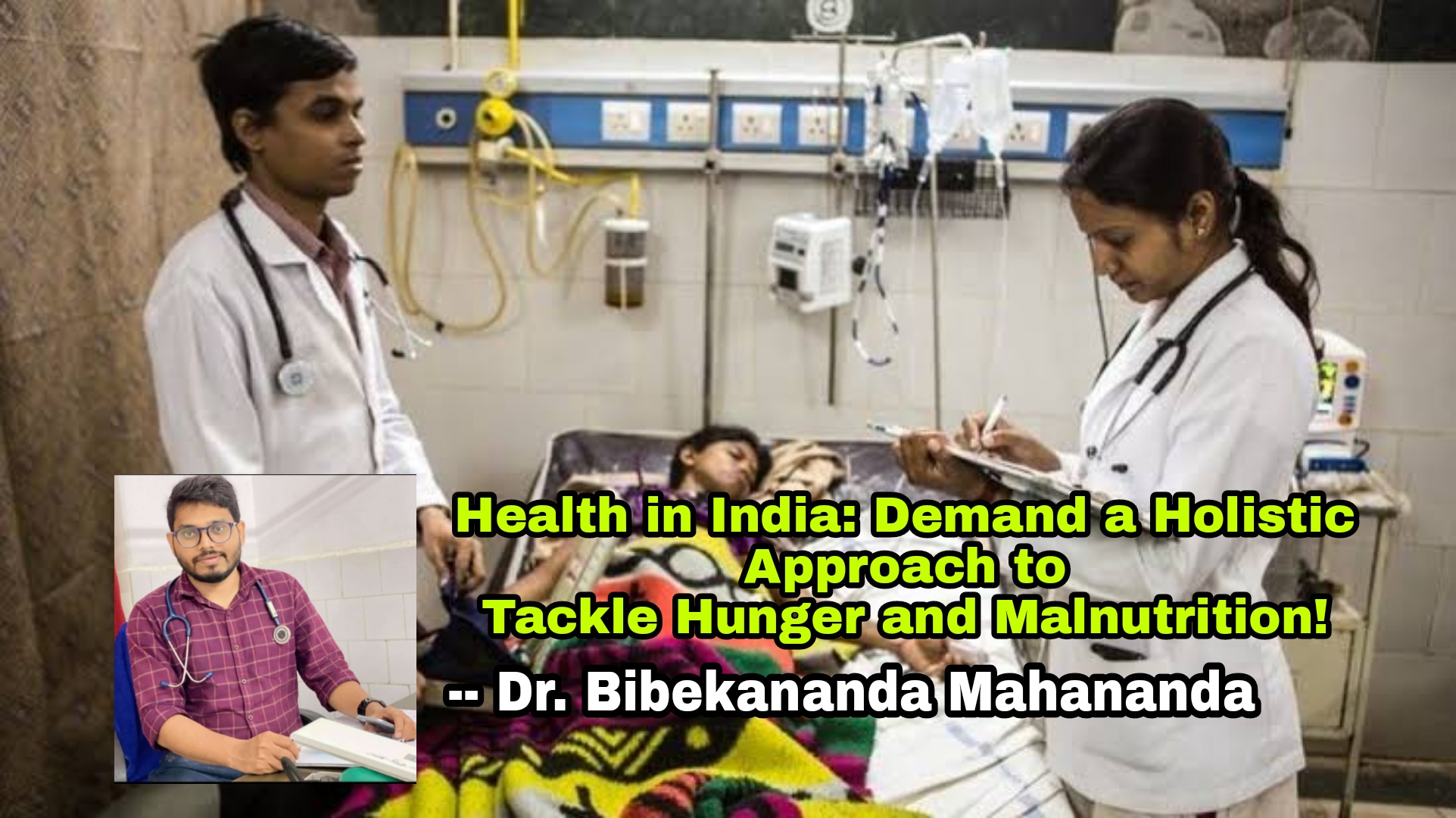 The Global Hunger Index has published in 2021, in which India’s ranked at 101 positions out of 116 countries. India is also among the 31 countries where hunger has been identified as a serious health issue. India ranked 94 among 107 countries in the Global Hunger Index (GHI) released last year. Compared to other neighbouring countries, India is behind where Pakistan was placed at 92 ranks, Nepal at 76, and Bangladesh at 76.

What is the Triple Burden of Malnutrition?

Firstly, Undernutrition has two components; 1-Stunting: children are defined as stunted if their height-for-age is below the WHO Child Growth Standards median. It is a clear sign that children in a country are not developing well – it is both a symptom of past deprivation and a predictor of future poverty. 2-wasting: Low weight-for-height indicates in most cases acute starvation and severe disease. Contrary to common belief, most wasted children worldwide live in Asia and not in emergency settings.

Secondly, Hidden hunger is a lack of vitamins and minerals which harm children and women. Iron deficiency reduces children’s ability to learn, and iron deficiency anemia increases women’s risk of death during or shortly after childbirth. Thirdly, Child overweight can lead to early onset of type-2 diabetes, stigmatisation, and depression, and is a strong predictor of adult obesity, with serious health and economic consequences.

Drivers of the Triple Burden of Malnutrition

Broken Food systems: Food systems (all the elements and activities involved in the production, processing, distribution, preparation, and consumption of food) fail to provide children with the diets they need to grow healthy. Two, Globalisation is shaping food options and choices: 77% of processed food sales worldwide are controlled by just 100 large firms. Three, Urbanisation: In cities, many poor children live in ‘food deserts, facing an absence of healthy food options, or in ‘food swamps’, confronted with an abundance of high-calorie, low-nutrient, processed foods.

Four, Poverty: Poor families tend to select low-quality food that costs less. Because of poverty and exclusion, the most disadvantaged children face the greatest risk of all forms of malnutrition. Five, Climate shocks, loss of biodiversity, and damage to water, air, and soil are worsening the nutritional prospects of millions of children and young people, especially among the poor.

World Health Organisation (WHO) defines health as physical, mental, and social well-being, not just the absence of illness. Therefore health is a multidimensional concept. It includes free from diseases both communicable and non-communicable, free from mental and psychological stress. India in the 21st century faces a dual problem. First, the traditional disease burden like tuberculosis, malaria, pneumonia causes a lot of mortality every year. Second emerging diseases like HIV-AIDS, cancer, obesity, diabetes, hypertension are increasing concerns.

Moreover, India also lacks maternal and infant care. With maternal mortality rate (MMR) about 120 and infant mortality rates (IMR) about 38, still far behind the developed countries. The recent pandemic has highlighted the dismal picture of India’s health care system. With a low doctor-to-patient ratio of 32 doctors per 1 lakh population to severe scarcity of hospital beds. Non-availability of necessary items like ventilators, oxygen cylinders. India is among the worst in several health indicators.

The 21st century poses newer threats to human health. New viruses and bacteria have been discovered in recent years. For example, SARS outbreak in the Middle East, swine flu in 2009-10, Ebola outbreak in 2014-15, and now covid 19 pandemic. This pandemic has the potential to threaten our social, political, and economic setup, leading to changes in lifestyle and working culture. The above changes have caused unintended problems. For example, it has increased mental and psychological stress leading to increased mental health problems and suicide.

Since independence, India has tried to focus on public health and healthcare. Article 47 of the Indian constitution states that the ‘state shall raise nutrition and living standards and improve public health among its primary duties. Subsequently, through five years plan, several acts like PCPNDT, the new national health policy 2017, fulfil the demands in health care services in the 21st century. Also, schemes like Ayushmann Bharat, POSHAN Abhiyaan, Eat Rights Movement try to bring quality healthcare for all. India, through mission Indradhanush, increased vaccination coverage from around 47% to over 80% within a very short period. Nonetheless, all efforts made by the government still worst performance in the global hunger index.

First, Prioritise resilience and adaptation among the most vulnerable groups and regions: Governments must invest in vulnerable communities in the Global South, such as small-scale farmers, to develop and carry out context-specific adaptation strategies that will strengthen food and nutrition security and food sovereignty. Second, Better prepare for and respond to disasters: Governments must increase investments in disaster prevention and risk reduction, especially in vulnerable regions prone to extreme weather events. This includes investing in early warning and response systems, forecast-based financing mechanisms, and adapted infrastructure. Third, transform food systems: Governments must promote sustainable production systems, consume nutritious foods, and reduce food loss and waste. The State of Agriculture report published by FAO finds that globally, around 14 percent of the world’s food is lost after harvesting. Around 60 percent of the total micronutrients are lost because of the wastage of fruits, vegetables, and animal-based products at various levels after harvest.

Fourth, Address inequalities: Measures to reduce poverty and existing inequalities are key to building resilience to the effects of climate change among the most vulnerable people. Therefore, governments must significantly increase investments in rural development, social protection, health services, and education. Five, Empower families, children, and young people to demand nutritious food: Stimulating demand for nutritious foods means educating consumers on the benefits of healthy diets and leveraging cultural and social aspirations. Six, Drive food suppliers to do the right thing for children: Demand alone is not enough; healthy food must be available, affordable, safe, and convenient. Governments must create a level playing field for all producers and suppliers and help ensure that their actions align with children’s best interests. Seven, Build healthy food environments for all children: The personal and external food environments are where children and their caregivers interact with the food system. While the forces of supply and demand shape food environments, context-appropriate actions such as mandatory front-of-pack labelling and protection against exploitative marketing practices can help create food environments conducive to nutritious diets for children. Eight, Mobilise supportive systems to scale up nutrition results for every child: As well as food systems, four other key systems must be mobilised to deliver nutrition services, improve nutrition practices and achieve nutrition outcomes at scale. The health, water and sanitation; education; and social protection systems must all deliver interventions in a coordinated fashion. A systems approach to children’s nutrition can help ensure that children and families have access to healthy diets and receive the nutrition services they need to develop to their full potential. Nine, Collect, analyse and use good-quality data and evidence regularly to guide action and track progress: Data collection methods and frequency must be transformed to expand what we know about the diets and nutrition of children, adolescents, and women at every stage of life. Data systems must become responsive, and a culture of data-sharing and transparency must be developed.